Why is the European bison the sole survivor of the Paleartic megafauna? 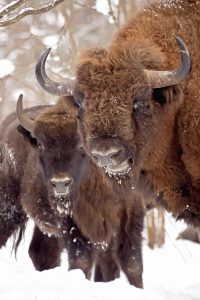 Late Quaternary megafauna extinctions impoverished mammalian diversity worldwide, with the loss of most of the large-bodied mammals in the northern hemisphere. The relative role of climate and human impact as the drivers of megafaunal collapse is hotly debated. One of the megaherbivores that survived until modern times was the European bison, now the largest terrestrial mammal in Europe. Bison population sizes fluctuated during the Pleistocene, possibly reflecting fragmentation of its distribution range during successive glaciations, rather than southward range shifts as observed in numerous other mammalian species. This persistence in the proximity of the glacial front may have been possible due to the European bison’s adaptation to colder climates, as confirmed by genome analysis. This permitted survival in latitudes less favourable for humans, and in effect allowed bison to escape the human impacts that were probably experienced by more southern megaherbivore species. Genome analysis, isotopic signatures over time and DNA-based diet analysis of modern bison show its adaptations to diverse environments and food resources. This plasticity in terms of habitat selection and foraging habits probably allowed the European bison to respond to rapid environment changes during the post-glacial period and survive, while the other large beasts have gone. Based on this hypothesis, climate extremes served to protect the European bison from humans, a substantially different perspective to that normally considered in the megafaunal extinction debate.