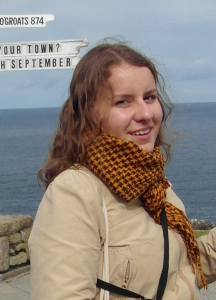 I am a biologist and archaeologist, who studied both topics at the Jagiellonian University, Kraków: biology and geography program (2003-2010) and archaeology (2004-2010). In 2006 I obtained a BSc in geography (soil science). In 2010 I completed an MA degree in archaeology (iron age in South India; including 2008/2009 MA program at the Madras University, Chennai, India) and several months later, an MSc degree in biology (physical anthropology). I continued with a PhD program (2011-2016) at the Jagiellonian University, Institute of Environmental Sciences, which involved ecology and specifically age-related trade-offs and telomere dynamics in passerine birds (blue tits and zebra finches). During my PhD I took part in internships at the University of Sydney (Australia) and Glasgow University (UK), where I further pursued questions of telomere dynamics and oxidative stress using lizards (Australian painted dragon) and fish (sticklebacks) as model animals. I completed my PhD in autumn 2016.

In March 2017 I have started my first postdoctoral position at the University of Warsaw in the Wild Urban Evolution and Ecology Lab as part of a the Polish National Science Centre OPUS grant on bird extra-pair mating in a gradient of urbanisation. I will investigate how promiscuity and other reproduction-related features vary in a gradient of life in a primeval forest to life in a city.